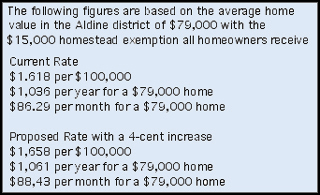 According to AISD financial superintendent Keith Clark the tax increase will be decided on in August after the Harris County Appraisal District releases the new appraisals for property values. At this time, this is the rate we think we will need for the budget weve approved, Clark said. If property values go up over what we projected, then we wont have to raise taxes as much.

According to Clark, the average property value in the Aldine district is $79,000. Even if the 4 cent increase is needed, the average homeowner would see an increase of only $25 a year, or $2.13 a month.