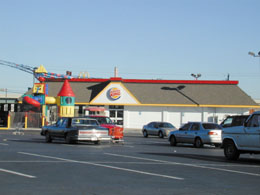 A robbery suspect was shot and killed Dec. 27 when Harris County sheriffs deputies foiled a heist at Burger King on Aldine Mail Route near U.S. 59.

The incident occurred at 11:30 p.m. last Saturday when two masked men shot through the front glass and forced their way into the restaurant. There were no customers in the restaurant at the time.

Employees fled to the managers office and locked themselves in. The robbers shot out the office window and demanded money, threatening the employees at gunpoint.

During the ordeal, the men shot an employee in the right arm. Another employee suffered breathing problems after the attack and went to a local hospital.

When police arrived, the suspects fled in opposite directions. As they fled, the robbers fired a weapon at the One hid behind the restaurant where an officer found him with a bag of money.

The other suspect fled north into a strip center parking lot across Aldine Mail Route. While in pursuit, a deputy reported that he heard a gunshot and that the man refused to drop the weapon even after the deputy fired several warning shots. Then, according to the deputy, he shot the suspect after he turned the shotgun on the officer. The suspect was pronounced dead at the scene.

The robbery was similar to those in a recent crime spree, which includes at least 10 violent hold ups at area restaurants since October. But police say this holdup is not related to the others.

Police are still looking for suspects in the crime spree. They are described as a black woman and three black men. All the suspects are believed to be between 19 and 25 years old.