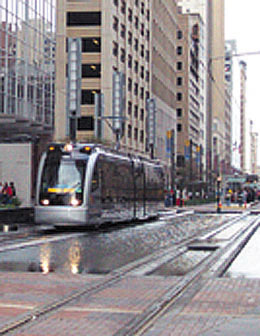 HOUSTON Thousands of enthusiastic first time riders tried out the new Houston METRO light rail rides on New Years Day, as the fourth largest city in the United States finally got a rail system, similar to most other major cities.

Metro estimated that as many as 15,000 were on hand during the first day, when rides were free and the trains ran every 15 minutes from 1:30 to 5:30. Metro employees were on hand to answer questions, give directions, and insure that no accidents marred the first day proceedings.

Staff of the Northeast News were among the first riders, and our impressions were that the trains were pleasant, and effective in moving people along the Main Street corridor.

Most everyone we talked with had the same feeling, and the day was festive and pleasant, with most all the riders having a good time and being courteous to each other, even when a delayed train now and then caused the lines to get long.

The current line only runs for about 7 miles north and south on Main Street in downtown Houston. The next segment that is planned to be built, according to Metro, will be a 5 mile stretch that connect downtown to the Northline Mall area.

Regular service on the first segment is scheduled to start on Monday, January 5th, and will run all day from approximately 5 a.m. until 10 p.m. in the evening.

Trains will be 12 to 15 minutes apart, and can carry as many as 400 riders, including standing room.

Fares will be $1 per one way, and $2 for an all day pass good for 24 hours. These fares, whether purchased at the MetroRail or on a bus, are good for transfers for 3 hours, so Metro expects the new rail system to be part of the overall network that riders will use.

As the accompanying map shows, the first segment runs from University of HoustonDowntown campus at the north, to the Reliant Stadium and Park and Ride lot on the South.

Mayor Lee Brown drove the first rail car out of the yard and into service at a ceremony Thursday morning, breaking a paper ribbon.