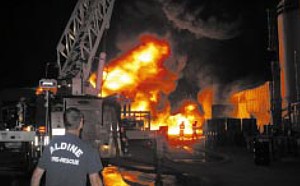 At about 9:30 pm a call came in for a fire at CRP Balmoral Inc. at 1900 Rankin Rd. at Aldine Westfield. Crews responded from several local stations including Aldine Eastex, Spring, Westfield, Northeast, Little York, Northwest, and Ponderosa.

In all about 80 firefighters brought the blaze under control by just after midnight, according to Kent Pegues with the Aldine Volunteer Fire Department.

We were being extra cautious since it was unknown what was stored in the building at the time, Pegues said. We were hearing little explosions. At the time, we didnt know what they were.

Employees were working in the building when the fire broke out. One employee had minor injuries. He was treated at the scene and released, said Pegues.

A Harris County Hazardous Materials team was called to the scene, since plastic pellets are manufactured in the building.

They put down something to keep water out of the drainage system, Pegues said.

The fire is still under investigation.