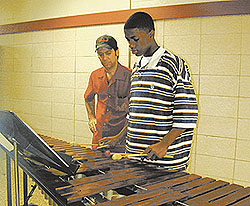 This month, the halls at MacArthur High are pulsating with Latin Jazz rhythms as students from all around Houston learn from the greats.
Professional musicians from across the country have come together to teach the next generation through the Diaz Music Institutes 5th annual Latin Jazz workshop that started earlier this month.

“We’ve been really fortunate that the Aldine ISD lets us use their facility during the summer,” said executive director Susanna Robles.

“The only Hispanic music that was being offered was Mariachi. It’s great music, but it doesn’t reflect the wide cultural heritage of the Hispanics in Houston,” Diaz said.

The student interest in the program exceeded Diaz’s expectations. It wasn’t just Hispanic students who wanted to learn how to play this music. Several white and African-American students have also become involved as well as a large number of female youth.

Virginia Stille, a singer and dancer who attends the Houston School for the Performing Arts, drives up to Aldine twice weekly and puts in 40 hours a week during the summer workshops to learn from DMI. “I’m getting a lot of advantage out of this,” she said.

“I didn’t anticipate how large the interest would be and how quickly the kids would pick up on this,” Diaz said. “We’re finding out that kids have been hearing elements of the music but just didn’t know where it came from, what it symbolizes, what it means.”

The summer workshop lasts for three weeks during which students work on theory, improvisation, ear training, vocals, and dance. During the first week, elementary students get twenty hours of training. The second week is split with middle school and high school students both putting in forty hours.

Saxophone player Jerome Joseph likes the institute’s teaching methods. “I’ve been to other summer programs but have never learned so much so fast and retained it,” he said.

The third week of the institute is open only to students who are invited to join DMI’s nationally acclaimed repertoire ensemble “Caliente.”

Caliente is the only youth group to be named the Houston Press Best Latin Band. It is a nationally acclaimed repertoire ensemble that has appeared with some of the music industry’s biggest stars such as Eddie Palmieri, Pete Escovedo, Danilo Perez, Nestor Torres, David Sanchez, Dave Valentin, and the Buena Vista Social Club.

In the workshop’s final week, Pete Escovedo and Jon Faddis will teach the students and then perform with them during a concert to celebrate the workshop’s conclusion.

Escovedo was the original percussionist on Santana’s Oyo Como Va. He is a patriarch of one of the most famous musical families based out of California’s Bay Area. He is now Wayne Bradys musical director.

“This is an opportunity for these kids to actually ask questions of someone who has lived through it and been there,” Diaz said.

The summer workshop will culminate with the First Annual DMI Showcase which will present Caliente with special guests Pete Escovedo and Jon Faddis. The show will be held at 9pm on June 25 at the Ruma Club on I45 south at Fuqua. Tickets are $12.50 in advance or $15 at the door.