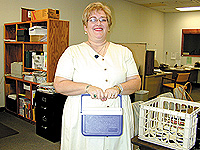 Everyone has things in their closet, attic, or garage that they don’t need anymore. It may be that a yard sale is not allowed due to deed restrictions or apartment rules. Or perhaps it would be more too much effort to take the items to a charitable organization. Whatever the reason, every day people throw away perfectly usable items that someone else would be happy to have.

That’s where freecycle helps. As the name implies, freecycling is a way of recycling items by giving them away for free. Over 250,000 people in 1,000 communities in both the US and abroad have created freecycle Yahoo! Groups as a way to share information about what they have to give away.

The subject lines in emails begin with the words OFFER or WANTED followed by the item. Interested parties reply to the sender. Once a match is made, the giver sets up a time and place for the receiver to pick up the gift. Follow-up emails with the subject line TAKEN or FOUND let other members know that the item is no longer available. The only catch is that all items must be given away for free.

Aldine resident Mary Reeves is a co-moderator of the Houston freecycle list which boasts over 2,000 members in just over half a year in existence. She said that one misconception about the group is that only needy people respond to offering emails.

“Not all the people who are receiving the gifts are people who are needy or are considered low income. A lot of them are affluent but they want to be kind on the environment and avoid the first use products,” she said.

Reeves figures that in the month of May the Houston freecycle list kept 4.5 tons from entering area landfills. In June that amount grew to over 6 tons. Reeves arrived at those numbers by looking only at items offered and then taken on this list.

“This does not include things people posted wanted ads for and then received or the extra things people get when they go to pick up items,” Reeves explained.

Reeves said the most common items gifted through the list are baby items, womens clothes, furniture, and working TVs. “People upgrade to a larger screen and have no use for the smaller one even though it works,” she said.

However, the items exchanged through freecycle are as varied as its members. Perhaps the most exciting freecycle transaction occurred on another citys list when someone gave away a house. Reeves explained that when the givers sold their property the buyer did not want the house. So they offered the building on freecycle.

Someone responded and transported the house away.

While no houses have been given away on the Houston freecycle list, there have been some interesting transactions. “I think someone on our list did receive a vehicle. It was not working, but the person who received it was able to get it fixed,” she said.

The best gift Reeves received through freecycle was a working lawnmower. The items she gave away which gathered the most interest was several collectors edition videotapes of Star Trek and Star Wars.

Members find unexpected benefits from joining freecycle lists beyond giving or receiving free items. Once members give away an item and have a positive experience, many start to declutter their homes. Clearing out a junky garage or closet has been proven to improve peoples mood.

Many members write Reeves to say that freecycling makes them feel good. “The most important thing is building community,” Reeves said.

Fellow Aldine Freecycler Jean Keiser agreed. “It’s mainly meeting the people that I like,” she said. “Meeting a couple of them has been a hoot and a half.”

On the Houston list, several different communities have emerged allowing parents who home school and soap and candle makers to meet and share items related to their interests.