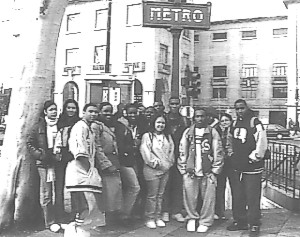 Springtime in Paris is only a dream for most. For thirteen Forest Brook and Smiley students, it became a reality.

This was an opportunity of a lifetime for many of my students, Juanita Broussard, Smiley French teacher said. Some had never been traveled outside of Texas before.

The food was very different, commented Forest Brook junio Terin Matlock. But everything else about the trip was great, she added.

There is no comparison to visiting historic sites like Notre Dame and the Eiffel Tower from reading about them, explained Martha George, Forest Brook French teacher.

The students visited the World War II Museums, several cathedrals, Versailles, and villages in the French countryside. Lisa Ortiz, a Forest Brook sophomore, described the Frech as very friendly. Sometimes we had a hard time with the money conversions, but the people were patient with me, she explained.

When asked if they were going back next year, all of the youngsters gave an excited yes. In nine days, the students visited ten towns and four castles.

Ms. George said she hopes to expand the program next year.