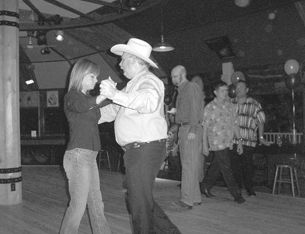 If you would love to go out dancing but have two left feet, then Thursday nights at the Tumbleweed Club is the place for you. That is when long-time dance instructor Gary Hensley gives free lessons to anyone who shuffles into the club on Kuykendahl.

From 8pm to 9pm, there are usually fifteen to twenty beginning students paired off to learn country & western dances such as the two-step and polka. After the lesson, students stick around to practice their new moves.

“When people learn to dance they are investing in themselves,” Hensley said adding that once you learn the moves, it’s a skill you never lose. Hensley uses an approach that makes learning to dance easy. He makes sure not to push or pull students, but rather helps them to sense the flow of energy. “It’s a rewarding thing to be able to teach a person and teach them right and then be out at a club and see them dancing,” said Hensley.

Dancing is a great work out with enjoyable fringe benefits. “It’s good aerobic exercise, plus you get to hold a beautiful woman in your arms while you are doing it which is better than jogging around the block.” He also added that research has indicated that dancing may help to prevent alstheimers.

Hensley has enjoyed dancing his whole life. Born and raised in El Campo, Texas, he first learned to dance from his father who was often dancing at political parties. After years of dancing around the house, Hensley started tap dance classes when he was ten. “At then years old, I wasn’t really excited about doing that. But I’ve incorporated some of that into my dancing now,” he said. Hensley’s parents also paid for dance lessons for all their children before the eighth grade dance and prom.

In 1985, he began teaching dance professionally for a company called Exclusives that had 12 dance studios in the city. When Exclusives closed, Hensley, like most of the other instructors, started teaching independently. He credits this influx of dance classes for the quality of dancing seen in Houston, which Hensley considers top notch. “Houston is a very unusual place when it comes to dancing. You can go to just about any club and see some well trained dancers on the floor.”

In 1994, a foot injury made Hensley hang up his dancing shoes for a while. For three and a half years, he recovered with the help of surgery, a cast, crutches, and physical therapy. But as soon as he was back on his feet, Hensley was on the dance floor. Over the years, he never became bored with dancing because he said there is always a new dance to learn.

Anyone can attend the free beginner’s class on Thursdays from 8pm to 9pm at Tumbleweed. A partner is not needed. Hensley also teaches private lessons for a fee. For more information, call Gary Hensley at 713-524-1842.