Time to drive a stake into the Blade movie franchise 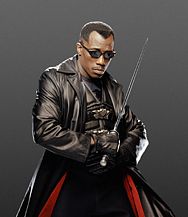 Midway through “Blade: Trinity,” Jessica Biel has a shower scene. Do we get to see anything? Nope. You’d think in an R-rated movie, we’d see … something. Heck, Biel has shown more skin in the pages of Maxim than she does in this scene. And that, in a nutshell, is what “Blade: Trinity” is  a lot of anticipation and no payoff.

The film stars Wesley Snipes as Blade, an ice-in-the-veins vampire hunter with a samurai sword, leather trench coat and MC Hammer hairdo. A group of vampires (led by Parker Posey) has set up Blade for the murder of a human. So now, in addition to having to fight the entire vampire underground, our hero is also being hunted by the cops. And with that hairdo of his, he isn’t hard to spot, so the cops capture him.

Blade is rescued by Biel and Ryan Reynolds, who play the leaders of a team of 20-something vampire hunters. What starts out as a gritty and promising sequel to a dark, violent movie franchise immediately downshifts into a bad episode of “Buffy the Vampire Slayer” once these two show up. Blade stops being the lone, savage stalker of the undead and instead winds up playing the straight man to a bunch of smart-alecky kids.

The kids have discovered that Posey’s character has resurrected the original vampire: Dracula. Supposedly, Dracula is the biggest and baldest vamp of them all, but when you see him, he’s just some puffy sack of Euro trash. There are baristas at Starbucks who are more intimidating.

Naturally, Blade and the Scooby Gang have to hunt down and kill Dracula. And, not to spoil it for ya, but … the good guys win.

“Blade: Trinity” is a letdown on so many levels. The first offense is that writer/director David Goyer betrays the character of Blade and the entire tone of the series by trying to turn it into a comedy. Blade is supposed to be the focus of the movie, not the hapless foil of a bunch of snot-nosed wiseacres. Goyer also rehashes a lot of plot devices from the first two films and, with the exception of the opening fight scenes, the battles in the movie are just plain dull to watch.

And worst of all is the blatant and shameless product placement. I know that virtually every film these days has product placement, but in “Blade: Trinity” the film grinds to a halt so that we can have a scene where Jessica Biel loads mp3s from her Apple computer onto her iPod before going out to hunt vampires.

If this is the direction these films are going, then I think it’s time to drive a stake into the Blade franchise.