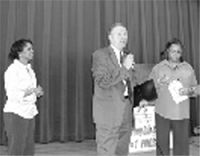 Also speaking were Lester Howard, Jackie Mayhorn, Robin German Curtis, and Albert Coleman who are founders of the group.
Much of the session was informational, to the extent possible, since the TEA conservator has not started investigating the finances of the district.
Many speakers emphasized the importance of bringing the standards of the district up, so that non-acceptable schools can have improved ratings, and the students who graduate can have a first class education, as most adults in the room agreed the district provided at one time.
The initiative is actually a partnership between Northeast Beyond 2000, Superneighborhoods 47, 48, 49/50 and other educational service providers.
The Initiative Group has independently hired an education consultant, Sharon Jacobson, whose experience includes directing the non-profit school reform group Project GRAD. She will be asked to devise a strategic intervention plan that can be implemented by the group, with the cooperation of the School Board, to bring academic improvements in the next year or two.
The meeting ended with vows from the speakers and the audience that they will work together to bring about ACE–A Community of Excellence.
The next meeting of this group is scheduled for April 14th, according to Ms. Curtis.