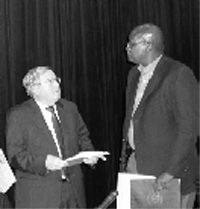 By Gilbert Hoffman
Acting at a special called School Board meeting last Monday March 12, Assistant Superintendent William Jones was appointed acting superintendent in place of Dr. James Simpson, who was terminated earlier. The vote was 6-1, with Trustee Silvia Brooks Williams voting no. She said later that she felt the board should have found a candidate with more experience in educational values, not administrative.

Jones has been with the North Forest ISD for over 30
years he said, and worked closely with Simpson. He said that in the near future he would concentrate on helping ready the students for their TAKS tests in April, and work with the TEA conservator Henry Boening to solve the financial problems that exist in the district.
Jones is not new to this position. He was acting superintendent during Simpsons 2 and 1/2 year term, when he was suspended by the board temporarily.
Also at the meeting, the board was introduced to the new TEA conservator, Henry Boening, who is a retired superintendent from Galvestion ISD. The conservators job will be to review all expenditures related to the FEMA and 2001 Bond monies, and see that they are properly accounted for. He is not expected to be involved in academic assessments.
Also during the meeting Monday night, there was extensive questioning of J. Paul Johnson, Assistant Superintendent of Opertions, about financial records and why they were not made available in written form at this meeting. Several members of the board complained that the administration regularly talked about the finances, but rarely provided the documents to the board to allow them to see the situation.
Johnson said he would see that the documents were presented to the board by next Monday, as requested. However, he pointed out to the North Forest News that his responsibilities did not officially include the financial matters of the district. These come under the office of the Director of Finances, Lamont Waddell.
The next meeting of the school board is scheduled for Monday night, March 19, at which time William Jones is expected to receive an interim appointment to the end of the school year.