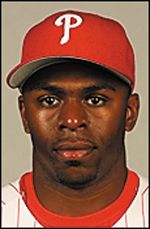 Nimitz Senior High School graduate Michael Bourn is coming home to play for his hometown baseball team.
Bourn was traded by the Philadelphia Phillies to the Astros on Nov. 7 in exchange for reliever Brad Lidge and utility infielder Eric Brunlett.
Bourn, who attended the University of Houston on a baseball scholarship, is expected to be the Astros starting centerfielder and leadoff hitter when spring training commences in February.
Bourn was a member of a Phillies team that won the NL East title this past season. He appeared in 105 games, had 119 at-bats and 33 hits for a .277 batting average. Additionally, he recorded 33 hits, scored 29 runs, hit one home run, had six RBIs and stole 18 bases. Bourn has two years of Major League experience and should provide some badly needed speed at the top of the order for the Astros.