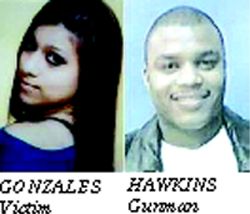 GREENSPOINT An apparently deranged gunman took the life of a store clerk, minutes before the Greenspoint Mall opened last Tuesday morning.
According to reports from the Houston Police Department, Jason Hawkins, 33, entered the mall through the Fitness Connection gym, where he had been working out, about 9:45 a.m. He accosted Joanna Gonzales, 20, who was opening the gate on her store, Body Luxuries.
Although police are not sure of Hawkins motives, is seems that he was attempting to assault and rape her, since she was found partially undressed. Mall security apparently interrupted this attack, and he talked his way into the store and took Gonzales to a back room, where he shot her in the head during the process. Shortly thereafter, he went to a counter at the front of the store, and killed himself with a single shot to the head.
When first accosted, Gonzales had been on the phone to her boss, the store manager, and her fear and statement Dont hurt me alerted the manager to call the police and the womans family. The mall security also had called for police help by this time, and a nearby HPD SWAT team was on scene within a few minutes. However, the incident unfolded so quickly that it was too late to save Gonzales.

HPD officials described a strange series of events that Hawkins undertook that morning, starting with a fire at his place of employment, an AT&T Solutions store, and then a call to his ex-wife as the assault unfolded. During that call he expressed regret over events in his life, and the lack of support by his family. Police later said that he had been evicted from his apartment and was facing a child support case in his native Cleveland, Ohio. He had lived in Houston for over a year.
Gonzales choice as the victim of his acts was apparently random, as police have found no relationship between the two.
There is a police and sheriffs substation in the Mall building, and they were able to respond quickly to events.
A Mall Santa Claus, Tom McKnight, was also helpful in warning other workers to leave and not go into that area of the mall as the shooting started.
Greenspoint has been working to reverse a perception that crime is prevalent in the area. The Greater Greenspoint District issued a statement after the event, pointing out that since 1991 violent crimes, such as this, have dropped 19% while the population has increased by 45%.
The Mall was closed for all of Tuesday, except anchor stores Sears, Macys, and Dillards, which have separate outside entrances. The rest of the mall reopened Wednesday.
Also Wednesday, HPD held a press conference, in which they played the tape recording of the conversation Hawkins left on his ex-wifes answering machine. During that conversation, Hawkins expressed his love for his ex-wife, and said that he had done some bad things and that she should watch the news.