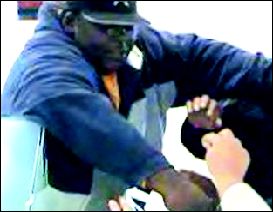 For the second time in 10 days, a Wells Fargo Bank branch loctaed at has been robbed.
The first time was on Nov. 16. Special Agent Patricia Villafranca said that a suspect has been arrested for that crime.
Now FBIs Bank Robbery Task Force is seeking the publics assistance in identifying a man who robbed the branch Nov. 26 at approximately 9 a.m.
The robber approached the bank security officer and asked for assistance. He then pulled out a small black pistol, pushed it into the officers side, and forced him to walk toward the teller area, said Villafranca. The robber kept the security officer next to him at gunpoint as he demanded money from the tellers. Once he obtained the cash, the robber forced the security officer toward the exit at gunpoint. At the exit, the officer broke away and the robber fled on foot heading south. Down the street, the robber may have entered a black Ford Expedition with beige molding around the wheels.
Villafranca said the robber is described as a black male, 30-35 years old, 509 to 600 tall, 230-250 pounds, large build, with a mustache and a dark complexion. He was wearing a blue and white jacket, dark pants, and a black baseball cap.
Crime Stoppers is offering up to $5,000 for information leading to the charging and arrest of this suspect, or any felony suspect. If you have any information regarding this case, contact Crime Stoppers Hotline at 713-222-TIPS (8477) or your local FBI office.