Elissa visit is first in 20 years 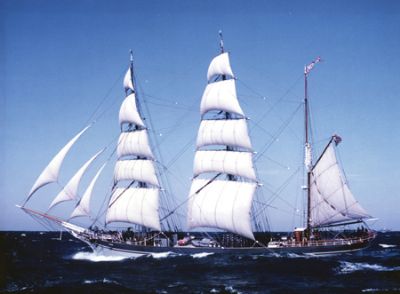 The public was treated last weekend to the first visit to Houston in 20 years of the tall ship Elissa, a square rigged schooner that usually berths in Galveston harbor.
The ship was on display at the Port Authority of Houstons Bayport Cruise Terminal, at the end of Cruise Road of Texas 146 in Pasadena, close to Clear Lake.
The 1877 sailing vessel usually can be seen at the Seaport Museum in Galveston, but the Port Authority brought the ship to Houston to highlight the new cruise terminal facilities for the public, with the cooperation of the museum.
The Elissa was found in a scrap yard in Greece in 1974, and purchased and restored by the Galveston Historical Foundation. This restoration work cost over $5 million dollars, and took over eight years.
Today, volunteers continue to maintain the vessel, and take it on occasional sailing tours. She was part of the historic Tall Ships parade in 1986 past the Statue of Liberty in New York harbor.
In addition to being on tour at the Port Authority, the Elissa will participate in the Houston Yacht Clubs 22nd annual Elissa Regatta.
The Elissa was built in Scotland, and sailed worldwide, calling on Galveston twice.