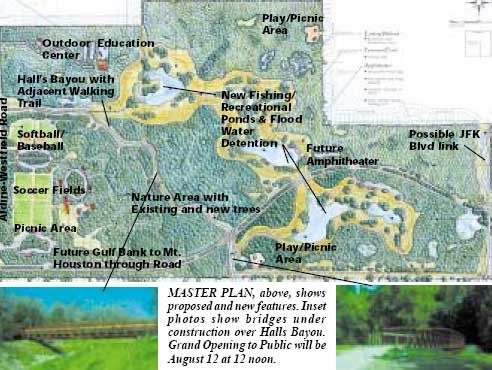 NORTHEAST HOUSTON  Keith-Wiess park with about 500 acres is about to fully open to the public, with an official ceremony on August 12 at 12 noon, according to officials.

At the monthly networking luncheon of East Aldine, held last Thursday at the Districts offices, Kirk Hooper and Beth Walters of the Harris County Flood Control District presented a talk and slide show of the parks history, development, and future functions for the community.

The luncheon varied from its usual format of discussion and networking, so that Mr. Hooper could make a complete presentation of this huge park, which will be important for the Northeast neighborhoods and city and county residents alike.

The park is actually an unusual partnership of the city, the county, and the flood control district, with additional funding from the state and the Texas Parks and Wildlife department.

Hooper related that the start of the park was actually a discussion on the mid-1970s between contractor George R. Brown and Charles Tapley, architect, about the need for more
park space in the city of Houston. They ended up taking a helicopter trip, and from the air decided on two large parcels to buy and develop into parks for the city.

One of these parks is Herman Brown park, near I-10 and East Loop 610. The other is the old dairy farm on Aldine Westfield that was purchased by the Elkins family, names after their parents Keith and Wiess, and donated to the city of Houston. The deed to the city stipulates that the land must be kept in a natural state, and used for family
and group activites.

Even though the land is in unincorporated Harris county, the park is actually owned and operated by the Houston Parks
and Recreation Department. Other entities with interest in the park include Harris County Flood Control District, which has developed the Master Plan with the help of architect Tapley, East Aldine Improvement District, within whose boundaries the park lies, and Harris County.

Hooper pointed out that a walking trail and some athletic fields have already been developed in the park and are in use, but that many more are part of the Master Plan.

The existing walking trails extend out of the park, and down to more parks being developed by Harris County and the City, near US59 and Little York. One of them is known as Bretshire Park after the subdivision it replaced.

A construction contract for $10.4 million, to make the park usable for both recreation and flood water detention, was recently completed. In additon, a grant from the Texas Parks and Wildlife Dept. was used to develop the wooden walks and piers, hike/bike trails, and other amenities for park use.

The grant provided for the construction of trails within the park, boardwalks across the wetland area, fishing pier, educational and informative signage, additional soccer fields, and playgrounds and parking.

Additional funds have been spent, including $900,000 for turf establishment, and $600,000 for two wooden pedestrian bridges over the bayou.

Hooper said that the detention features, holding 300 million gallons, will mean that in flood conditions, downstream flooding may be reduced by anywhere from 4 inches to 1 foot. This is a significant amount, he said, for one facility to help with.