State acts to replace North Forest School Board and Superintendent 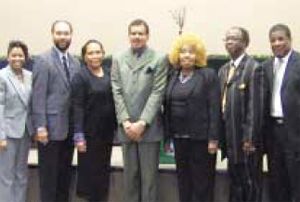 AUSTIN – Commissioner of Education Robert Scott announced today that he will install a board of managers and a new superintendent in the North Forest Independent School District this fall.

The appointments of the new administrator and a three-member board, which will replace the current school board, are pending preclearance from the U.S. Department of Justice.

Scott said he was taking this action because of the districts extensive history of deficiencies, its recent significant problems and its current failure to consistently work cooperatively with the assigned management team.

Its unfortunate that this drastic action is necessary. We have tried every intervention at our disposal except this one. While our management team and agency employees have helped the district cut its deficit and improve its academic performance, the district remains in a very precarious position. It is necessary for the Texas Education Agency to place a superintendent and board in the district to safeguard the educational environment for students, Scott said.

The district is expected to start the new school year with an $11.8 million budget deficit. The district will not be able to sustain itself financially at its current taxing rate. During the last school year, North Forest was unable to meet payroll using appropriate funding sources and it cannot reconcile its bank statements. Its been denied short-term bridge loans by several banks. The districts bond rating has been downgraded. Due to the financial problems and declining enrollments, schools were closed as a cost saving measure.

Additionally, the instability of the school board remains a chronic problem for the district. The school board in March 2007 terminated the superintendent and paid him $233,000 in severance pay. The board has twice tried to rehire this superintendent but that action was overruled by a TEA conservator.

Based on its academic and financial track record and its failure to comply with state and federal requirements, TEA earlier this year placed North Forest on Accredited-Probation status, which is one step short of closing the district.

The commissioner is hopeful that the board of managers will stabilize and improve the districts situation so that closure is not necessary. A board of managers can remain in place for up to two years. Under state law, the appointed board may exercise all the powers and duties of a school board.