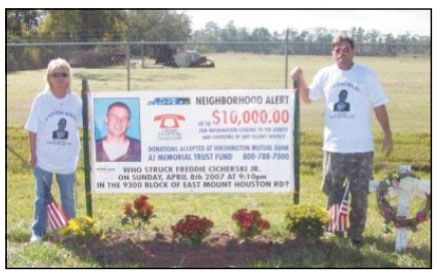 Parents of Freddie Cicherski, Jr., who was hit and killed on April 8, 2007 at 9:10 pm as he walked westbound at the 9300 block of E. Mt. Houston Road, have erected a sign near the spot of the accident, posting notice of a $10,000 reward and asking for witnesses to come forward to Crime Stoppers with information. Freddie was struck by at least two vehicles, one described as a dark-colored pick-up truck, possibly a Ford 150. Terri and Freddie Sr. feel that the hit and run may have been intentional, and think that because of heavy traffic along the highway, there must have been witnesses who saw what actually happened. Crime Stoppers rewards are anonymous, according to the organizations Ray Wathen. Call 712-222-TIPS if you have any information.