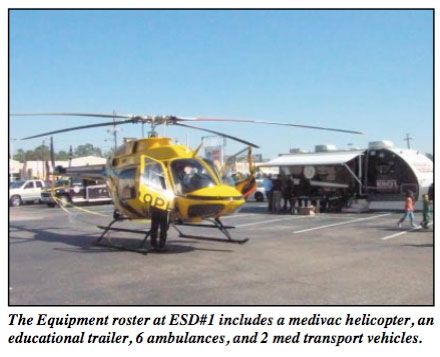 The recent Fall Festival at Aldine Sheriffs Storefront included a display of equipment and services from the Emergency Services District #1, which serves a large area of Northeast Houston and the Aldine/Airline/Greenspoint areas. This covers an area of about 78 square miles and almost 400,000 people.

The display included a yellow medical evacuation helicopter, and several of their new ambulance and transport vehicles. The helicopter proved to be a popular exhibit with families that attended the Festival. ESD#1 also handed out CPR kits and First Aid kits, as well as answering questions about their services.

ESD#1 started in 1991, through a majority vote of property owners in the service district. A 3 cent per $100 tax is levied on property to pay for this vital service.

The service has six ambulances, which are located throughout the district to provide quick response time. These are at Airline Drive, Fallbrook Drive, where the helicopter also is stationed, Aldine VFD on E. Richey Road, headquarters at Isom Road, and two locations on Aldine Bender Road.

The service answers about 3000 calls per month, including 30 helicopter calls monthly.

An interesting aspect of the service, is that the helicopter is not an on call service, as with most ESD agencies. The plane is actually leased to ESD#1, and housed at one of their stations, on Fallbrook Drive.

In addition to emergency calls, ESD#1 is concentrating on non-emergency transport calls to other medical facilities, which will increase their income. At present, their budget is about $5.3 million, of which only $1.6 comes from the property assessment. Insurance payments, private billing, and transfer income make up the difference.

Citizens are invited to ride along as part of an outreach program that the ESD operates. Contact the main office, or visit their web site at www.hcesd1.org to make arrangements. Their headquarters office is at 1620 Isom Road, off Aldine-Westfield near the Keith-Wiess Park entrance. Their non-emergency number is 281-449-3131.