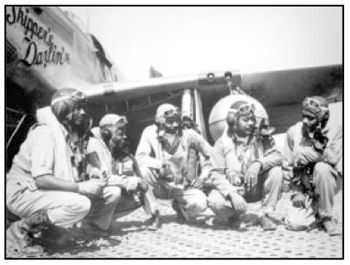 Members of the famed World War II Tuskegee Airmen have made personal appearances at several locations in the Northeast Houston area recently.

They appeared at the half-time ceremonies of the MacArthur football game last Friday night, riding to the center of the field on several golf carts with AISD Director of Athletics Dean Samuel. They also spoke the following Tuesday at the Greenspoint Rotary luncheon at the Greenspoint Club.

They appeared at a special presentation at Lone Star College-North Harris on Thursday, Oct. 30, 7 p.m. in the Performing Arts Theatre located in the Fine Arts Building on campus. The Tuskegee Airmen, the first black fighter squadron in history and Congressional Medal of Honor recipients, flew in air combat over North Africa and Italy during World War II.

The 99th Fighter Squadron, which had already distinguished itself over North Africa, Sicily and Anzio, joined three other Black Squadrons; the 100th, 301st, and the 302nd. These squadrons, designated as the 332nd Fighter Group, comprised the largest fighter unit in the 15th Air Force.

From Italian bases they destroyed enemy rail traffic, hundreds of vehicles on air-to-ground strafing missions, and coast watching surveillance stations. Sixty-six pilots were killed in aerial combat while another 32 were either forced down or shot down and captured to become Prisoners of War.

These courageous airmen came home with 150 Distinguished Flying Crosses, Legions of Merit and the Red Star of Yugoslavia.

These pioneer aviators had one of the most distinctive records of all the WWII air squadrons and were nicknamed the Red Tails by U.S. bomber crews they protected. The success of this squadron influenced President Harry Truman to integrate the U.S. military, says Dr. Theresa McGinley, LSC-North Harris history professor and event liaison.