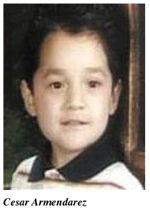 A nine-year old child was the innocent victim last week of a home invasion in the 12000 block of E. Hardy. Cesar Armendarez was a student at AISDs Stephens Elementary school.

On Oct. 29 Harris County Sheriffs Deputies responded to a Home Invasion Robbery/Shooting at two residences, located in the 12100 block of E. Hardy near Hill Street.

When deputies arrived on the scene, they learned that four Hispanic males had forced entry into the corner house, tied up the female resident and ransacked the house, Sgt. A.B. Beall said.

The suspects made entry into a second house, located next door to the first house. The suspects tied up at least one resident of the second house before being confronted by the homeowner and fleeing the resdence, Beall said. The suspects fired multiple gunshots into the second house from the front yard and street. The bullets penetrated the exterior wall of the residence and struck the Cesar Armendarez, 9, who was sleeping in his bed, killing him.

The boys father, Pedro Armendarez, received a gunshot wound to the leg and was transported by ambulance to the hospital.

The case is under investigation by the Harris County Sheriffs Office Homicide Division. Anyone with any information regarding this case is asked to call the Homicide Division at 713.967.5810 or Crime Stoppers at 713.222.TIPS