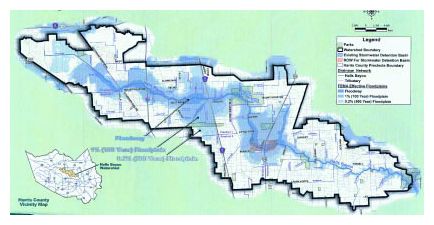 NORTHEAST HOUSTON — The public was asked to participate last week in a series of three meetings hosted by the Harris County Flood Control District, to hear the status of the Halls Bayou Flood Control Study project, and to offer their comments and suggestions.

The meetings were held at MacArthur High School on Tuesday night and Saturday of last week. Anyone who missed the event, but wishes to participate, may access the information and suggestion forms at www.hcfcd.org/hallsbayoustudy. These are due by March 23.

As presented by HCFCD Study Manager Russ Poppe in a talk and slide show, the District is undertaking the Halls Bayou Federal Feasibility Study to identify a comprehensive plan designed to reduce damage due to flooding along Halls Bayou. The District began the study in 2006, in partnership with the U.S. Army Corps of Engineers. It is anticipated that the study will take about 7 years to finish.

The study is meant to lead to large, long term solutions to the problems of flooding in the Halls Bayou Basin, and as it leads into Greens Bayou beyond. It is anticipated that if the criteria are met, the federal government through the Corps of Engineers may pay for as much as 75% of the remedial work. In the meantime, Harris County can pursue other more immediate remedial projects with its own funds, but currently these are limited.

In the Aldine area, flood control projects include Keith-Wiess Park on Aldine-Westfield, Hall Park on the East side of US59 near Langley, and Bretshire Basin on the West side of US59 near Jensen. Each of these is under construction and two will include recreation features. They have been built with funds from the County, the City, and Texas Parks and Wildlife Dept.

In his remarks, Poppe pointed out that as a tributary of Greens Bayou, that Halls Bayou is located in north central Harris County, and include the City of Houston and central Harris County and unincorporated areas of the County, including those in the East Aldine and Airline Districts. There are approximately 200,000 people living in the area, which covers nearly 45 square miles and is about 20 miles long. There are more than 5,700 structures in the mapped 100 year floodplain area.

The purpose of the study, Poppe said, is to identify a plan that would address flooding problems and to qualify for federal funding to bring greater damage reduction benefits to the communities along Halls Bayou.

Techniques that might be considered as part of the study include Storm water detention basins, Purchase of homes and businesses that flood frequently, Bypass Channels, Bridge Improvements, and Channel Modifications. Public input is sought on these issues. You may call 713-684-4040 with additional information or suggestions for your neighborhood.