Judge Emmett gives State of the County address for 2009 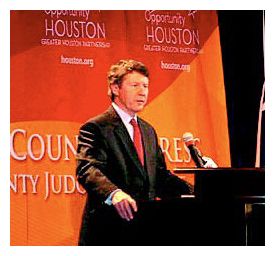 Harris County is home to the fourth largest city in the nation, and part of a larger whole that means we must plan for a future that is inextricably tied to others, according to Harris County Judge Ed Emmett, speaking to the Greater Houston Partnership and delivering his State of the County address last Thursday.

But the good news is that we are financially sound, due to conservative financial planning.

The County is due to adopt a 2009-2010 budget at their next session, of about $1.7 billion dollars, which is 7 percent larger than the previous year. However, due to increased property appraisals averaging 10 percent, no tax increase will be required.

Challenges in the future will include dealing with unprecedented growth and its related issues, he said. Population is expected to double by the year 2030, and will bring problems to solve in transportation, health care, education, job creation, and quality of life issues.

Emmett stressed that the key to solving all of these problems will be cooperation between government entities on a regional basis, and public/private participation in the process. He cited a number of examples of success in this regard, including how the region dealt with the Hurricane Ike strike, and subsequent damage and relief.

Emmett pointed out that Harris County is becoming the Gateway to North America and that international commerce will be the key to our greater prosperity. It is our future he said.

The Port of Houston and its infrastructure will be key to the success of international commerce. Transportation will be important in this regard, including commuter rail, METRO light rail lines, and extension of transit to areas not now served.

Health Care must be improved, with the need for more than two Level One trauma centers, the separation of mental health from the criminal justice system, and other governments sharing in the cost of indigent care for patients living outside Harris County.

Education is a key component in the future, and Emmett would like to see the University of Houston developed into a Top Tier status institution.

Finally, preparation by both governments, businesses, and the public must continue to deal with more natural disasters such as Hurricane Ike brought to the Gulf Coast, he said.