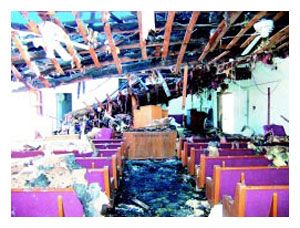 NORTH HOUSTON — Last Tuesday afternoon, flames tore through the sanctuary and roof of Mt. Sinai Missionary Baptist Church, on Gaston and Vickerey. This venerable old church, which has survived on this site since 1951, was scheduled to celebrate its 70th anniversary on Sunday, April 19th.

The fire departments that responded, Westfield, Aldine, and Little York, blocked E. Mt. Houston and other local streets for hours as they fought the blaze. Although they eventually got the fire doused, most of the interior and roof were destroyed, and will have to be replaced.

A spokesperson for the congregation told the Northeast News that they plan to rebuild, but have only a small insurance coverage, and will seek donations and support from the community to help replace the building.

Pearl Patton and Jesse Alexander, two members of the congregation that spent the week in trying to salvage and cleanup the site, noted that this church was the first in the North Houston Heights community. The church is not far from the Orange Grove Elementary School.

Harris County Fire Officials have indicated that arson is not indicated, and the probable cause of the fire was defective wiring in the ceiling feeding equipment.

The church has made arrangements to continue services, at the Sheriff s storefront facility at 5202 Aldine Mail Route. Services will be at normal times: 9:30 Sunday School, 11:00 Church Service, and Bible Study Wednesday evening. The public is welcome to these services.

In addition, donations of money and goods are asked for by the congregation. An account has been set up at Wells Fargo bank, and donations can be made in the name of the church. The account number is 135-893-6977.