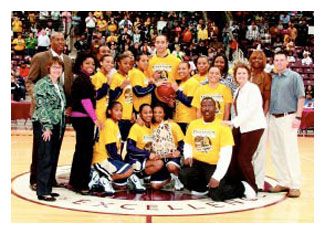 AUSTIN — A talented and determined Nimitz girls basketball team competed last weekend for the state title in Girls District 5A. Rated No. 1 in the state, this was the first time in history that the team had gone as far as the final playoffs in Austin.

Led by coach Debbie Jackson, and the play of Brittney Griner, ranked No. 1 player in the country, the Nimitz Cougars overwhelmed Pflugerville Friday night in the semi-final game, winning easily 74-47.

Griner scored 44 points, with 17 rebounds and 8 blocks. Her score was a UIL tournament record. She made 19 of 21 shots as the team ended with a 37-1 record to date. 8,700 fans were present at the Erwin Center, many from Houston since the other playoff game was Cy-Fair.

However, in Saturday nights Finals game, Summit knew they had to contain Griner, and kept two defensive players on her most of the game. Griner only managed 21 points, as the Cougars fell 52-43 to the Summit Jaguars. The Cougar play was marked with turnovers from the pressure. Although the Cougars started with a 7-0 lead, they actually trailed the rest of the game, after the Jaguars had a 12-2 run to end the first quarter 12-9. The Jaguars Starr Crawford was named the MVP for the state tournament.