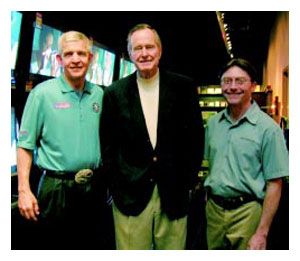 The visit was an impromptu stop, as President Bush wanted to see the latest entrepreneurial venture of his valued friend, owner Jim McIngvale.

McIngvale toured President Bush around the 15,000 square foot store that features collections from famous manufacturers such as Kreiss, Drexel Heritage and Tempur-Pedic. The store was designed by noted interior designer Bill Stubbs.

The two men have had a long history of partnering together in many philanthropic ventures from Tsunami Relief for those halfway around the word to Hurricane aid for those devastated by the Gulf Coast hurricanes.

A spokesperson for Former President Bush said that he was proud of the success of McIngvale’s new location.