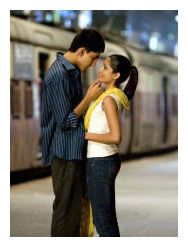 The film opens with a young man, Jamal (Dev Patel), who is on the Indian version of “Who Wants to Be a Millionaire?”. He has answered every question correctly and is only one answer away from winning the grand prize. Because Jamal is an orphan and comes from such a poor background, it is assumed that he is somehow cheating, so he is brutally interrogated by the police to find out how he can possibly know the answers to such hard questions.

And so the film unfolds in a series of flashbacks of events in Jamal’s life that illustrate how he came to know the answers to questions — from the death of his mother, which leaves Jamal and his brother homeless and poor on the streets of Mumbai, to their escape from a Fagin-like character who wants to lead the boys into a life of crime, to Jamal’s search for his lost childhood-love Latika (Freida Pinto).

“Slumdog Millionaire” is an amazing movie that mixes humor and brutality without compromising the integrity of the characters, and still manages to get away with a Bollywood dance number at the end. Brilliant.

ALSO OF NOTE
“The IT Crowd: The Complete Season One” — One of Britain’s funniest TV series is finally on DVD in America. Until now fans had to resort to illicit Internet downloads or ponying up the cash to watch the show on IFC.

Written and directed by Graham Linehan (“Father Ted”), “The IT Crowd” is a hilarious sitcom that revolves around the misadventures of two socially inept geeks who work for the IT support team of a huge multinational corporation that is run by a complete moron. If you’re a fan of British comedies like “The Mighty Boosh” or “The Office,” then you definitely need to check this out.