Multi-use center may be built in Aldine 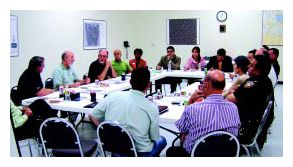 NORTHEAST HOUSTON – The East Aldine District is leading a task force that is examining the possibilities of several community organizations combining in a new building or perhaps a campus of buildings, to serve the community from a central site. This would be an expansion of the district facilities that are now in the shopping center at 5202 Aldine Mail Route.

Clyde Bailey, chairman of the East Aldine District, pointed out that as the district’s services grow and citizens learn the benefits provided by the district, the need for larger and more accessible facilities is becoming evident.

New opportunities to service the district, such as refuge in floods and hurricanes could be incorporated in the new facilities.

Other management districts, such as that in East Montgomery County, have provided complete building complexes that serve as government and social service centers, public safety offices, meeting facilities, learnings facilities, and much more.

The city of Houston also has a number of multi-use service centers, in various neighborhoods, that provide social and government services.

At the initial planning meeting, led by David Hawes of the East Aldine District, various ideas and needs were expressed by participants.

These included government representatives, including state representative Armando Walle and Reuben Landa from Senator Gallegos office, Dru Gutierrez representing Harris County Precinct 1, Gilbert Hoffman of the Northeast News and the NHG Chamber of Commerce, Bill Townsend of North Houston Bank, East Aldine District, and the Chamber, Ralph Wheeler, Eduardo Rodriguez and Gloria Jackson of the YMCA, Scott Bean, and Gerald Overturff of the District, Paul Cordova and Max Turner of the HCSO, Dr. Steve Head and Joyce Wiley of Lone Star College North Harris, and Richard Cantu of the East Aldine District, who organized the meeting. Anyone in the community wishing input to this group may contact Cantu at his office, 713-595-1220.

Planners said that realization of such a facility would be several years in the future. In the meantime, they are looking at possible sites, and making an inventory of agencies that might want to participate, and what their space needs, parking and outdoor facility needs might be.