Pro-active Sheriff’s Unit to be on “Cops” TV Show 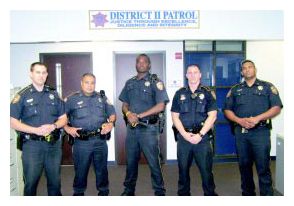 ALDINE – The busy nightlife inside the East Aldine District caused Harris County Sheriff’s Office and the District to put together a special task force to work in the neighborhoods, targeting perpetrators and patrolling high crime areas, so when the TV show Cops gave notice of returning to Houston, commanders recommended that the TV crews ride around Harris County with the District’s Pro-Active Unit.

The Cops TV show often focuses on entertainment valued aspects of law enforcement rather than the perfunctory routine activities that are the true heart of service to a community. They are coming to Houston to see the perspective of this Pro-Active team that specializes in troublesome elements. This group is out looking for the unsavory aspects of street crime, making traffic stops on people with behaviors identifying themselves as probable perpetrators. This crew rolls to the hot calls where they happen. Television isn’t going to pay much attention to the guys that watch school crosswalks and write traffic tickets during the day to working folk, but tends to focus on the more sensational night chases, drug arrests, dysfunctional street trade by soiled doves, and guys with their shirts off — looking for a fight.

The TV crews are generally going to be in Houston focused around East Aldine for the next eight weeks filming from the patrol cars. There are going to be lots of interesting incidents from which to choose, some that will not make the show due to a long running story but there is sure to be plenty of opportunity for gathering intense action and life-altering drama on tape.

Every law enforcement officer this reporter has conversed with about communities in transition over the last 20 years bears witness, a transformation happens at sometime during the night, “It goes from mostly working people to about all cops and crooks with few exceptions after midnight.” said Sergeant Spurgeon, head of the unit.

The special skills and training of this task force has been successful in locating gang related and street crime activities in hotspots and known high crime areas since its inception. They are shifting to a new time of service for the duration of the Cops ride along, from 7:00 p.m. to 3:00 a.m.