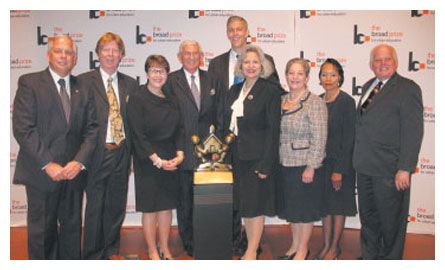 The Aldine Independent School District was named the national winner of the Broad Prize for Urban Education. The announcement was made in Washington, D.C. on Wednesday, Sept. 16, at the U.S. Capitol’s Congressional Auditorium.

Philanthropist Eli Broad announced the winner at the U.S. Capitol’s Congressional Auditorium. “Aldine deserves to celebrate today,” Mr. Broad said. “Aldine has demonstrated that when an entire community and district work together with a singular focus on educating every child, they can succeed, even against the odds of poverty. Their success holds valuable lessons for other urban districts trying to do the same.”

“This is a tremendous accomplishment for our board of education, our staff, our parents and our students,” Dr. Bamberg said. “We are so appreciative of the Broad Foundation for selecting Aldine as its national winner and for the generous gift they provided to help Aldine students attain a college education. This is a wonderful day for everyone who is a part of the Aldine family. This doesn’t just represent four years of school for our students, but a chance to change lives. By being recognized on the national level, this award endorses the long hours and hard work many have put in over the years in educating our children. Our board should also be commended for its vision and leadership in making academic gains among all of our students its top priority.”

Among the reasons Aldine stood out this year among large urban school districts:

• Outperformed other similar Texas districts. In 2008, Aldine outperformed other districts in Texas that serve students with similar family incomes in reading and math at all grade levels (elementary, middle and high school), according to The Broad Prize methodology.

• Closed achievement gaps. Despite the relatively small size of achievement gaps between its low- and non-low-income students, Aldine still made progress between 2005 and 2008 in closing income gaps over time in reading at all school levels and in elementary and middle school math. Aldine also narrowed the gaps between its African-American students and the state average for white students between 2005 and 2008. For example, during this time, the gap between these two groups narrowed by 14 percentage points in middle school math.

However, Broad Prize data analysis shows that school-level poverty does not appear to be statistically related to student achievement in Aldine at any grade level in reading or math.

High student achievement is just as likely in a low-income Aldine school as it is in a non-low-income school.

The Broad Prize for Urban Education is an annual award that honors the most outstanding urban school district in the United States that has made the greatest improvement in student achievement while reducing achievement gaps among ethnic groups and between high- and low-income students.