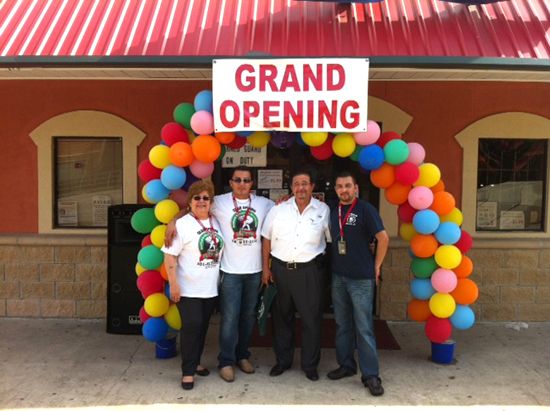 On August 25, 2012, a new Restaurant opened its doors to the Aldine community. El Peon Restaurant is a traditional restaurant serving seafood and Mexican food. El Peon Seafood & Mexican Restaurant has been opened by De Santiago Family, José, Gloria and their sons Luis and José; it’s located at 5158 Aldine Mail Rt., where the old Chinese restaurant used to be.

Starting at 6 a.m., neighbors can enjoy a delicious breakfast everyday for only $1.99 until 10 a.m. and breakfast tacos are only 99¢. Lunch Buffet is from 11 a.m. to 5 p.m. and dinner from 5 p.m. to 9 p.m. (or closing) with “a variety of food, from seafood through Mexican food, sopas, enchiladas, tacos, chiles rellenos, most Mexican food,” said Gloria de Santiago. They also have “The typical caldo de res (beef soap), mole, beef stew,” said Jose de Santiago. They also served cauliflower and potatoes cakes [these are broiled cauliflower or potatoes then fried with eggs in a small cake form].

The list does not end in the food, El Peon Seafood & Mexican Restaurant also has desserts such as “the never left out cheesecake, choco flan, churros with cajeta,” said Gloria and her son Luis. One other thing that customer ask for is the “cheese empanadas,” Gloria added.

For those who want something lighter to eat, there is a salad bar. El Peon Restaurant also has fresh fruit water of different flavors such as watermelon or seven-passion water with berries (antioxidant), coffee, tea, soft drinks and sodas.

For seafood they offer whole fried tilapia, breaded shrimps and much more. Special is the burrito dinner and Karaoke which also is played on Friday from 6 pm – 10 pm, Saturday 6 pm to 12 pm and Sundays from 2 pm to 8 pm. For to go orders please call 281-617-7152, more specials at El Peon ad on page 8.

In 2000, an Early Childhood and Prekindergarten Center, de Santiago was named to honor Jose de Santiago, an Hispanic who has dedicated his life to help the community when he can. Jose de Santiago and his wife Gloria, had been active supporters of little league, Optimist Chicken Club and more. His metal fabricating business provided a clubhouse for the kids. A friend of the school board recommended Jose’s name on the new school for his hard work in supporting the community.