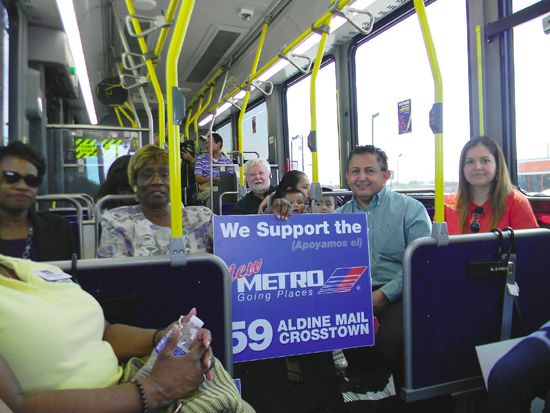 NORTHEAST – Last Friday representatives of METRO, members of the East Aldine District, community leaders and neighbors met for a demonstration ride of the extended METRO route 59.

Starting Monday, August 27, METRO extended route 59 to include stores on I-45 North Freeway by West Rd. The extended Route 59 known as Aldine Mail Crosstown will start at Aldine Mail Route in front of the Social Security Office, continue on Aldine Mail, then on Airline Drive the bus will turn to the right, then left on West Road, a right on I-45 North’s feeder, continue traveling to Aldine Bender making a U turn to finish at the Walmart store.

Including Aldine Bender will give a closer distance to LSC-Greenspoint Center for students and to Immigration Services.

Art Murillo, representative of METRO, said that two bus stops may be added to this extended route; one by the intersection of Airline and West Rd. and the other on North Freeway’s feeder, in front of Walmart to provide a closer distance to the store.