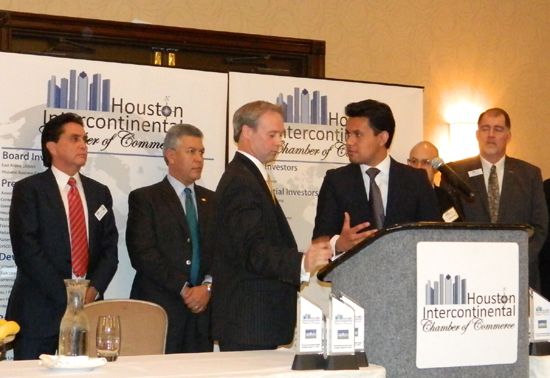 Chamber members were treated to a double Forum of ideas and issues last Tuesday, Jan. 15 at the 7th Annual Economic Forum.

Each North Houston speaker reviewed their most recent projects and indicated the growth factors in their market area. These presentations then led into the second round of speakers, who characterized the need for various types of energy in the future, and how their companies and organizations were preparing to meet these needs.

In addition to these two roundtables, the Chamber also received recognition as a new partner with the country of Mexico, and signed a formal agreement with ProMexico to represent mutual commercial interests between the two countries.

The relationship with Mexico was presented by Alejandro del Valle of Houston’s Hispanic Business Center. A formal agreement between the Chamber and ProMexico was signed by Gray and the Mexican representative, Jose Medina.

Gray explained that ProMexico is a division of the Department of Commerce of the Mexican government, with offices worldwide to promote trade and investment with Mexico. They currently have offices in Dallas and Houston, and plan another Houston office in the Hispanic Business Center in Greenspoint.

Each of the speakers in the Energy forum noted the need for more resources as the population grew, and became heavier users for technical and manufacturing purposes. They seemed to agree that in the future gas presented the best possibility to meet these needs, and each outlined their company’s strategies to serve this growth. They indicated that the alternative fuels, oil, coal, wind, solar, hydro would be important but not adequate to meet the demands.