Northeast News Defensive Player of the Year. Bush lets action on field do his talking for him 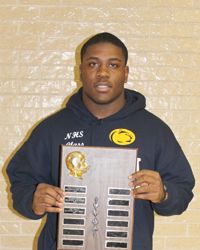 Larry Bush isn’t much of a talker on the field. He’d rather let his actions do his talking for him.

And that was certainly the case during the 2012 season when he completed his senior season for the Nimitz Cougars.

Bush, a three year starter at middle linebacker, accounted for 114 tackles (40 unassisted), one interception and one forced fumble. Those impressive numbers earned him the Northeast News’ Defensive Player of the Year honors.

The 6-0, 225-pounder was a dream to coach, said his head coach Robert Toomer. “Larry is what we call a true middle linebacker,” Toomer said. “He plays tackle to tackle. He’s a smart young man and he made all the defensive calls for us the last two years.”

In addition to excelling on the football field, Bush is also solid in the classroom. He has a 3.1 GPA and scored 1,200 on his SAT. Toomer is hoping some school, be it Division I or Division II, takes a chance on him so he get the chance to play at the next level.

“He most definitely has what it takes (to play in college),” Toomer said. “I hope he gets the chance. He’s had some interest from Division II schools. All he needs is a shot. He has the grades, that’s for sure. He’s a good kid and he’s solid in the classroom. You wish you had more like him on your team.”

During his three years on the varsity, Bush accounted for 300 tackles, three interceptions and forced nine fumbles.

Toomer said Bush drew the interest from the coaching staff as a freshman. They moved him up to the varsity, but brought him along slowly.

“He caught our eye as a freshman, but we didn’t want to shellshock him, so we brought him along slowly,” Toomer said. “Once we put him in the starting lineup as a sophomore, he became a fixture and leader on our defense.”

In addition to his play-making ability, Bush also possesses leadership abilities as evidenced by the fact that he was a captain all three years that he played on the varsity.

“Larry is one of those guys you hate to lose,” Toomer said. “I hope all of his hard work is rewarded. He’s a true student of the game. He’s not a rah-rah guy. He lets his actions do his talking for him.”