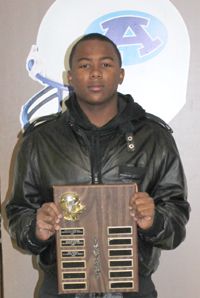 Derrick Brown wasn’t the biggest guy on the Aldine Mustangs roster, but he sure played big during the 2012 season.

Brown, a senior quarterback, rushed for 1,124 yards and passed for another 938 yards (he completed 65 of 129 passes) to account for 2,062 yards of total offense for Lionell Crawford’s team during the 2012 season. He was also a scoring machine as evidenced by the 17 rushing and seven passing touchdowns he accounted for this season.

Brown was one of a handful of Aldine ISD players who turned in strong offensive seasons. Eisenhower junior running back Donald Catalon rushed for 1,076 yards and totaled another 178 yards on receptions. He also scored eight touchdowns during the season. MacArthur running back Shaquille Rain rushed for 816 yards and added another 132 yards receiving. He also scored 14 touchdowns for the Generals. Nimitz running back Dre’Vian Young, a two-time silver medalist in the 400-meter dash at the Class 5A State Track and Field Meet, led the Cougars to the playoffs by rushing for 1,140 yards and scoring 10 touchdowns.

All three of those individuals had solid seasons, but Brown stood out among his peers and earned the Northeast News’ Offensive Player of the Year honors.

Brown arrived at Aldine High as a sophomore after spending his freshman year at Nimitz High School. Crawford played him at defensive back and wide receiver his first year, and then decided to give him a shot at quarterback heading into spring training during his sophomore year.

“I had my eye on two kids who we wanted to play quarterback and Derrick was one of them,” Crawford said. “I told them the best man would win the job and Derrick won the competition.”

The 5-8, 170-pounder was a two-year starter under center for the Mustangs and saved his best season for his last.

“Derrick started the season with a bang. It was scary how good he was,” Crawford said. “Derrick only played quarterback at a 5A program for two years and I thought he had a very good senior season. The young man had a nice senior season.”

Crawford said Brown’s biggest attributes are his speed. He runs a 4.4 40-yard-dash and thinks he has a chance to play at the next level.

“My guess would be that schools will recruit him as a wide receiver or defensive back, unless he goes the junior college route and goes to a school that runs the option. He threw the ball well for someone who was a running quarterback. I think he’s put himself in position to get a chance to play at the next level. It would be a great opportunity for him to get out and see the diversity that exists on a college campus.”

Crawford said Brown’s best game this season came against Oak Ridge when he rushed for 251 yards and scored five touchdowns in the Mustangs’ 41-34 victory.

“That performance put him in the record books,” Crawford said. “He became one of the few Mustangs to rush for more than 200 yards and score five touchdowns in one game.”

Brown’s name is also in the record books for the 100-yard kickoff he returned for a touchdown during his Aldine career.

“Derrick is a good kid. He’s respectful and coachable,” Crawford said. “He’s also a good student and that will help with recruiting. He’s set pretty well.”

Now all he needs is the chance to prove that even though he may not be the biggest guy around, he has the ability to make big plays when given the opportunity.