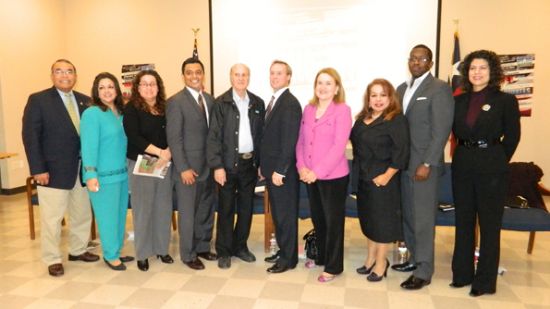 NORTHEAST – Voters in Senate District 6 that live in the Aldine area, had the opportunity to meet and question the eight candidates for the seat vacated on the death last year of State Senator Mario Gallegos.

The venue was the offices of the East AldineDistrict, and the well publicized meeting was held last Thursday evening, from 7 to 9 pm. About 75 persons attended the meeting. Although the campaigning for this open seat has been vigorous, and at times contentious, it was noted by several candidates that this was the first time that all eight candidates had appeared together on the same platform.

Reggie Gray, the president of the Intercontinental Chamber of Commerce, served as moderator for the evening’s discussion, or debate. After opening statements by each candidate, Gray presented a series of questions from audience members, and allowed each candidate to respond. After the Q & A period, each candidate was allowed time to summarize their positions and qualifications.

Most of the discussion during the evening centered on educational issues, including increased safety in our schools, and the need to restore cuts in the education budget, and how to generate more local jobs in the current depressed economy. Additional topics that were covered included health care legislation, and immigration regulation.

In particular, Republican R.W. Bray said that jobs and education were his top priorities, and urban development. He pointed out that only 44% of Aldine residents are high school graduates, suggesting this should be much higher. He wanted to create an “enterprise zone” to help the economy and job creation. Currently we have 14% unemployment in Aldine, he said.

Sylvia Garcia wanted better public education, citing her own history and the difference it can make in one’s life. She said not only jobs, but those with good pay and benefits were important. She criticized the governor for his position on Medicaid, vowing to expand coverage and accept more federal dollars. She cited here involvement with Aldine when she was a County Commissioner, helping to bring the NFL Super Bowl YET center to the Northeast Community Center.

Juaquin Martinez cited the need for change in the way we get things done, saying working with families at the grass-roots level could bring about this change. He said we need to develop leaders in our communities.

Maria Selva, a candidate on the Green Party, was concerned about alternative energy sources, cleaner environment, and genetically modified foods. She was concerned that the “Citizens United” court ruling diluted everyone’s vote strength.

Dorothy Olmos, one of two Republican Candidates, wanted to provide choice of schools for parents, probably with a voucher program. She also thought high schools should promore vocational training. She saw opportunities to build more “bridges” between businesses and schools.

Rodolfo Reyes cited his 32 years of government experience, in jobs and office, and said it was important for leaders to be accessible to people, so they can talk with them. He noted that only 7% of the registered voters in SD6 had voted last time, expressing a disinterest in the office and the governing process. He praised the East Aldine District for their accomplishments.

Susan Delgado noted her close relationship to the late Senator, and that it gave her a better knowledge of the needs of the office. A number of times she noted the need for an “honest” politician in this office, “for the kids.”

Carol Alvarado noted her experience as third term State Representative, and that she was quite familiar with the Senate district. She stated emphatically that restoring education funding must be a priority, noting cuts in public education and college funding by the last state legislature. She also wants the state to expand Medicaid and accept federal dollars for this, saying that otherwise we stand to lost $90 billion dollars over the next 10 years that other states will get instead. She stated that Aldine now feels “forgotten” and that we need a Senator that is consistently visible.

Moderator Gray handled a number of specific questions. One involved School Safety, and Security, and what each candidate proposes. Most answered that they favored better gun control and armed officers at the schools, but not armed teachers.

On the question of what distinguishes each from the other candidates, answers varied. R. W. Bray, with a laugh, said it was obvious, he is a “black Republican.” Sylvia Garcia noted her passion for public service, and her ability to deliver services in Aldine, including parks, water and sewer, and the YET Center. Maria Selva said she was interested in issues others ignored, such as the XL pipeline and a “cancer corridor” of pollution in Houston. Reyes said he listened more to people.

When asked how they would create more jobs, Alvarado cited the Town Center proposed in East Aldine and a state Enterprise Fund, and an educational partnership with MacArthur High School.