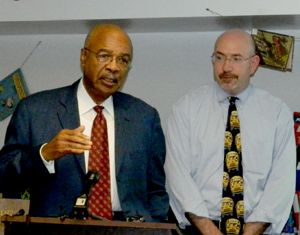 A group of Charter Schools propose to take over and run the district, through a non-profit entity known as PHILO.

Philo has been in existence for a number of years, long before the North Forest crisis, according to Rod Paige, former HISD supintendent, PHILO board member, and former U.S. Secretary of Education. PHILO would be the manager of a 3 charter consortium that would take over and run the North Forest district, responsible for academic achievement, completion rate, and financial accountability.

In a news conference on Monday of last week, Paige and KIPP founder Mike Feinberg, also a board member of PHILO, outlined somewhat more specific plans for running the district.

Later that evening, at a North Forest Board meeting, NF Superintendent Edna Forté reported to the community on these PHILO plans. She also reported on the second initiative, which was a meeting with the TEA on Friday, March 15 to discuss and protest the decision to close the district.

Attending the TEA hearing were Forté, North Forest attorney, Chris Tritico, administrator James Troutman, and others. This meeting lasted over 4 hours, and was conducted in a state hearing room. The group told the TEA that of the 10 items that the district had to meet as a condition of their continued operation, they had clearly met 8 of them, and 2 others were under appeal or substantial progress had been made. She said the evidence they present was a solid case, worthy of reconsideration. She said that the district missed the completion rate, one of the important criteria, by only 2 students, which meant a 66% rate when the state was requiring 75%.

The group made the point to TEA that they sought Innovative Alternatives to closure, and therefore had investigated a partnership with Texas A & M, and more recently a partnership with PHILO and 3 charter schools that offered to help run the district.

As Forté said, “We are not conceding, we are trying to innovate.”

Forté made the point, that the district was now classified by the U.S. Dept. of Education as a “Choice” district, due to failure to meet requirements, and a letter had been sent to parents informing them that they now have a choice of which school to send their children, at the district’s expense.

Attorney Chris Tritico said that the problem with the Closure order was that the initial hearing was in front of the same person who ordered the annexation, thus could not be impartial as required. If the district does not get another reprieve, this would be one point to be appealed in court. The next hearing would be in front of an Administrative Law Judge in the judicial system, not the TEA, Tritico said. After that, there are still two appelate courts available to hear the pleadings.