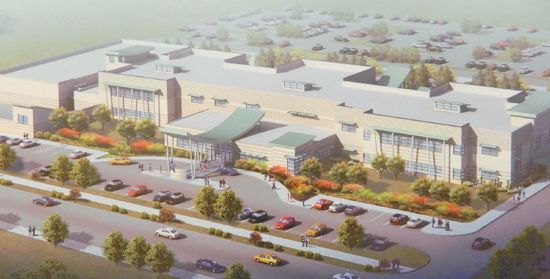 NORTHEAST – Lone Star College North Harris president Dr. Stephen Head and a group of his administrators met with the East Aldine District and community leaders in business and education, to discuss how the college could serve the district residents in the future.

Dr. Head spoke about the extraordinary growth of the college system, now serving 90,000 students and expected to continue to grow.

To meet the needs of this student population, the system is planning to hold a bond referendum election on May 11th, with early voting starting April 29th. Voters will be asked to approve bonds totalling $497 million. Dr. Head emphasized that this amount would allow the system to continue to build and grow, but would not require a tax increase from property owners. This is due to the large tax base in the service area, he said.

The $497.7 million bond referendum includes financing for learning facilities at each of the Lone Star Campuses – projects that were prioritized and outlined by a group of citizen leaders to the board in February.

This amount includes $$120 million for facilities for LSC-North Harris, including a new instructional building for the East Aldine town center project. That building would be about 85,000 square feet in size, and include parking for 650 autos.

LSC-North Harris now serves 19,000 credit students in 4 locations. East Aldine would be the fifth facility, and serve several thousand students. The facility is expected to be on a bus line for access, and will be adjacent to a 500 acre Keith-Wiess Park.

The new structure would teach ESL, GED, and Pre-college courses. It would have half its space for workforce training, and half for academic classes. Workforce training would include HVAC, welding, engineering technology, and machining. These are all benefit economic development in the EAMD district, EAMD president David Hawes noted.