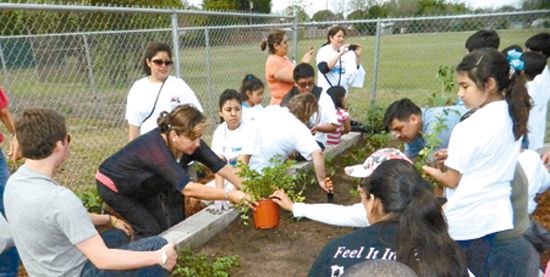 A large group of wanna-bee urban gardeners showed up last Saturday morning, at Orange Grove Elementary School, to participate in the new East Aldine Community Garden. The gardens themselves are on adjacent land owned by the East Aldine District, and open to anyone that joins the gardening group and follows a few simple group rules, explained East Aldine’s Natali Lacasa.

Saturday’s work session was held with about 75 adults and youths participating. Expert guidance for planting the six beds was given by Ray Sher, a consultant from Urban Harvest in Houston.

The gardens consist of six raised beds, about three feet by 15 feet, defined by concrete block and filled with rich soil.

Groups that have indicated an interest in one of the beds include Bonding Against Adversity, Orange Grove Elementary, Girl Scout Troop #12011, National Technical Honor Society from MacArthur High, HOSA from MacArthur, Sheriff’s Explorer Post #42, and the local North Houston Heights Civic Association.

So far the garderners have planted tomatoes, radishes, summer squash, and mint, but there are no restrictions on what anyone can plant, including flowers, except size considerations.

The Gardening Consultant Ray Sher is from the Urban Harvest organization, and guided all the participants on best practices, planting techniques, watering considerations, weeding, and how often they should tend their plants. Urban Harvest is a national organization, started in Seattle, with a large presence in Houston. They have helped start over 100 community gardens in the Houston area, and conduct the Farmer’s Markets held downtown weekly.

The Community Garden associaton plans to meet monthly, and have three harvest seasons each year. There is room for more gardens to be built, according to Natali Lacasa and Richard Cantu of the East Aldine District. If you are interested in information, or to join and plant, call Natali at 713-595-1226.