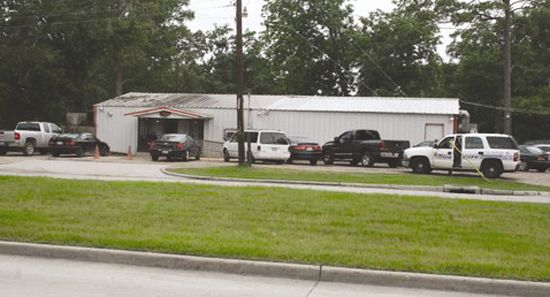 NORTHEAST (April 8, 2013)–Harris County Attorney Vince Ryan announced that a lawsuit has been filed against a northeast Houston game room where a security guard was shot on Sunday, April 7, 2013.

On Sunday (April 7) morning during an apparent attempted robbery, a man in a ski mask fired several shot gun blasts wounding a security guard. The man and a woman who appeared to be with him fled the scene.

The game room has been the location of at least three gambling investigations. The machines commonly called eight liners resemble Las Vegas style slot machines. Machines are illegal if they pay out more than ten times the amount charged to play the game or $5 whichever is less.

Ryan said the shooting of the security guard is an example of the criminal activity that illegal game rooms attract. “These places are not safe for customers or neighbors,” County Attorney Ryan said. Ryan explained that illegal game rooms generate large amounts of cash, leading to crime in the areas in which they are located, including robberies, assaults and homicides.

County Attorney Ryan’s office is authorized by state law to file civil lawsuits against businesses that fail to take steps to stop or control illegal activity. After hearing the case, the judge may sign an order to force the business to close if it does not stop the illegal activity.

The lawsuit is scheduled for a hearing on May 17th.