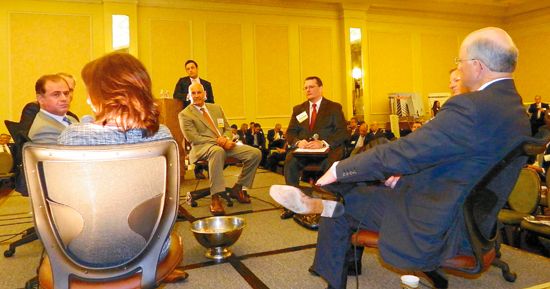 NORTHEAST HOUSTON – The Greenspoint District mounted a major conference last Wednesday morning, to examine “The Future of Greenspoint” as development pushes out from the center of Houston to many areas, including Greenspoint and beyond.

The relevance of this panel was underscored by the imminent completion of a large new office center for ExxonMobil Corporation, until now a major tenant in Greenspoint and downtown Houston.

Greenspoint District president Jerry Lowry explained in his opening remarks that it was time to see the positive side of all these changes, and to seek direction and new opportunities.

Participating in the conference were seven representatives of major real estate developers and commercial realty firms that are active in this area and other parts of the city. These included Chip Colvill of Colvill Office Properties, Lee Jeanne of Avison Young, Dan Bellow of Jones Lang LaSalle, Palmer Letzerich of Hines, Zaya Younan of Younan Properties, Bryan Marsh of Digital Realty, and Michelle Wogan of Transwestern, who moderated the panel. Hosting the event was Bisnow’s Will Friends, adding humor and civility to the serious pronouncements.

The discussion was both general, and detailed in some cases, and lasted about one and a half hours.

Lowry presented a slide show that emphasized the strengths of Greenspoint, including location close to the airport, proximity to the seaport, and access to fiber networks on the I-45 corridor. In addition, it was noted that when ExxonMobil vacates space over the next two years, it will present good opportunities for new tenants who desire Class A space. Lowry said that current marketing efforts by the District are focusing on international prospects through trade missions and partners. There is also a major effort to retain current tenants, with interviews of companies to determine and meet their future needs.

It was noted that while Oil and Gas interests were the major tenants in Houston’s past, it is now much more diverse, with the city becoming more of a technology center. To this end, innovation will drive the growth, said Dan Bellow. Bryan Marsh said that his property at the northwest corner of I-45 and Beltway 8 is indicative of what can happen in the Greenspoint area, with available fibre networks attractive to technology firms.

Some negatives were examined, including the dormant Greenspoint Mall and a high percentage of apartments with a transient population.

Participants agreed that the area can meet its challenges with upgrades to infrastructure, retail and amenities. Future tenants will be seeking power, fiber networking, security, low crime and flood risk, and tax incentives, all of which Greenspoint District and the City can work to provide.