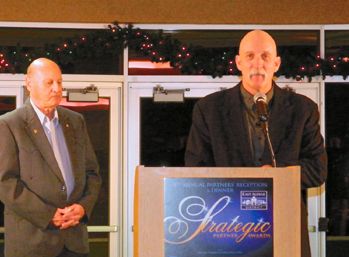 Awards were presented to those partners who had participated with the district in their goals of improving living conditions for residents of East Aldine.

About 150 persons attended, including business members, officials, board members, educators, public safety officials, and friends. The emcee for the evening was Dr. Bennie Lambert of Lone Star College North Harris.

After the awards, remarks about the status of the district were made by Chairman Gerald Overturff, and President/CEO David Hawes.

Overturff added flavor to the evening with his remembrances of the Aldine area developing from a rough rural environment, to the urban quality it has today, with utilities, public safety, and good educational facilities.

Hawes said he thought East Aldine had finally achieved the quality of a real community, with 60,000 persons living here, and $40 million in new water and sewer utilities either installed or planned. He said he thought the district was “changing the lives of people in this community” and he had a “Vision of Aldine being a Community of Excellence.”