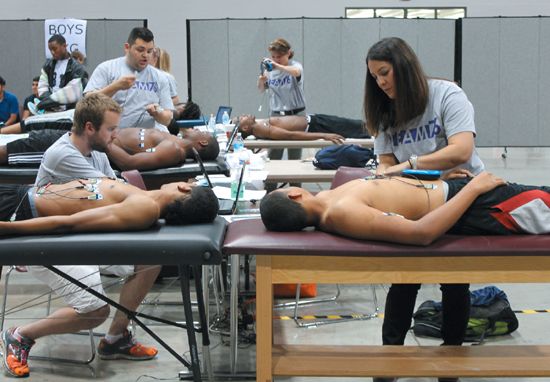 More than 750 Aldine ISD student-athletes received free heart screens in conjunction with their annual athletic physicals on Tuesday, May 6 at the M.O. Campbell Educational Center.

Student-athletes received their screens from personnel from the Cypress ECG Project, a Texas-based non-profit organization that provided ECG equipment and staff to conduct the testing.

The results will be read and interpreted by Cardiologists and results of the tests were expected to be returned within two days, along with information regarding any potential diagnosis.

The free heart screens were funded by the Cody Stephens Go Big or Go Home Foundation. The heart-screening program is committed to preventing Sudden Cardiac Arrest. On May 6, 2012, Cody Stephens was a few weeks from graduating from Crosby High School, he seemed to be in perfect health, and had no idea that he had a fatal heart problem. On that Sunday afternoon Cody kicked back in his dad’s recliner and dozed off for a nap. He never woke up. Cody’s father Scott attended the event, which was the biggest to date in the Houston area. State Rep. Sylvester Turner also attended the event. He is working on legislation trying to make ECG screening mandatory for all Texas athletes. Rep. Turner has pledged his support to make it happen in the next Legislative session, which will begin in January of 2015.

For more information about cardiac screening and the Cypress ECG Project, www.cypressecgproject.org or call 361-236-5898.

For more information about the Cody Stephens Foundation, go to www.codystephensfoundation.org or email: scottpstephens@gmail.com.