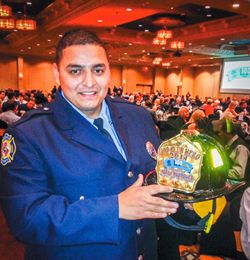 May 16, 2014 – Westfield Fire Department firefighter Pedro Rodriguez was honored by The 100 Club of Houston 60th Annual Heroes Awards ceremony on May 14th. Rodriguez was nominated for the award by a fellow firefighter for his rescue, which took place on August 15th, 2013.

Rodriguez was leaving his shift at Westfield when he observed a vehicle on Beltway 8 leave the roadway and collide with a light pole head on. Rodriguez immediately stopped his vehicle and called 911.

“We are very proud of Firefighter Rodriguez ” said Westfield District Chief Chris Turrentine. “In an emergency situation, seconds count. Had Rodriguez not been in the right place at the right time, and acted with unyielding courage, the driver of the vehicle most certainly would have perished.”