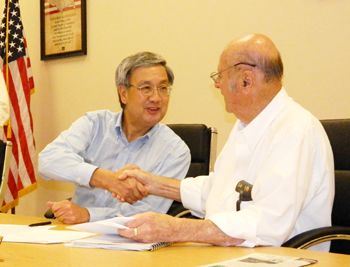 EAST ALDINE – Neighborhood Centers, Inc. a social services agency with locations throughout Houston and surrounding Texas counties, has come to an agreement with the East Aldine District to build a campus with various community services, to be 40,000 to 50,000 square feet and project costs at approximately $20 million dollars total.

This is in addition to the college facility planned for the site by Lone Star College-North Harris, and other amenities and facilities to be built by the District. Also planned is a facility for the Sheriff’s office to handle 9-1-1 calls for the whole county.

At their board meeting last Tuesday evening, Sept. 16, East Aldine District adopted a “memorandum of understanding” with NCI, to allow them to proceed with planning and fund raising.

In this document, EAMD agreed to convey 7 acres of land fronting Aldine Mail Route, to be used by NCI to build several buildings and develop outdoor support areas. NCI reported at the board meeting that they have already received commitments for a substantial portion of project costs.

Planned for the NCI site are such amenities as workforce development and training, a “maker space” or business incubation center, financial services, adult enrichment programs, after school programs, senior services, voter registration services, health and medical services, and more. NCI plans to partner with other agencies to provide some of these services, and to help pay for them. This model is used in their other developments, and as a result they are able to have 72 community facilities in the Houston area. Their total yearly budget is over $260 million dollars, according to their latest annual report.

Prior to last week’s EAMD board action, a joint meeting was held with NCI, and their facilities were toured.

At the meeting was Angela Blanchard, NCI president, David Hawes, Gerald Overturff, and some EAMD board members, State Representative Armando Walle, who has been very interested in helping this development, and Melissa Gonzalez of Lone Star College. The parties investigated the possibilities that resulted in this agreement.