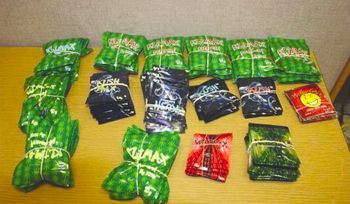 “Synthetic marijuana is an extremely dangerous substance and a growing risk to Texas youth, as evidenced by the mounting numbers of recent hospitalizations in Texas related to its use,” Attorney General Paxton said. “These stores were operating in blatant disregard for the law and with an utter disregard for the safety of their customers. I commend investigators and officials who are working to put an end to this substance’s distribution.”

“These products are marketed and sold to children, despite defendants knowing the products are illegal and unsafe. Use of these products has not only caused illness, but even death in some cases,” said County Attorney Vince Ryan. “The statement on the packaging that it is ‘not intended for human consumption’ is simply an absurdity. The packaging itself was designed to provide cover for the seller and the user if they are confronted by law enforcement.”

In a coordinated effort involving criminal and civil enforcement, the Harris County Sheriff’s Department and the Texas Attorney General joined forces to fight this growing threat to Texas youth. As part of the operation, undercover agents from the Sheriff’s department were deployed into the defendant stores to purchase the items. Among the products being sold is a product called Kush, which is sold in various fruit flavors. The packaging states that Kush is “lab certified,” “contains no prohibited chemicals or materials” and is legal for sale in all 50 states. It lists the “main ingredients” as a variety of innocuous sounding vegetable matters—such as “lemon balm,” “passion flower” and “wild lettuce,” – without any mention of the key ingredient, AB-CHMINACA, a highly addictive and dangerous chemical.

After the undercover operation, the Texas Attorney General filed a lawsuit against the stores and their owner, Bao Quoc Nguyen, also known as Tony Nguyen, they are being sued for engaing in false, deceptive and misleading acts and practices in the course of trade and commerce since they are clearly misleading consumers that these products are safe and legal. They are also being sued as common nuisances under Texas law.

Attorney General Paxton obtained a temporary restraining order and a temporary injunction to prevent the sale of these products. A permanent injunction will be sought at trial.