A smokey, stubborn fire at a pallet storage yard on Mooney near the Eastex Freeway burned intensely for over 5 hours, and even 10 hours after it started fire departments were on hand distinguishing hot spots.

Guy’s Pallet Company has been open for about a year, according to the owner, Esbeydi Cedilla. Destroyed in the fire were stacks of pallets some over 50 feet high, a trailer home on the property, and some 17 cars, two trailers, and a motorcycle at a car sales lot next door.

The two alarm fire started around 1:30 a.m., and was fought by multiple fire companies, including Aldine, Eastex, Spring, and Houston. Firefighters discovered that a nearby hydrant was not working, and had to haul water by tankers to a dump tank, to have adequate water. They also ran hose about a mile to a working hydrant near the Eastex Freeway.

The storage yard has propane tanks, and 10,000 wooden pallets that were in the fire. They also lost trucks and forklifts, according to Cedilla, and the loss was not insured.

END_OF_DOCUMENT_TOKEN_TO_BE_REPLACED 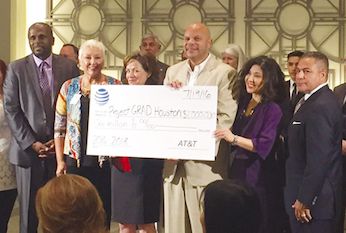 AT&T is contributing $1 million for the 2016-17 and 2017-18 school years to expand Project GRAD’s GRADuation Aspirations program to students enrolled in Aldine ISD schools located on the north side of the district. Project GRAD Houston is an organization that focuses on improving lives in low-income communities by helping students develop and achieve their educational aspirations.

The program is also being offered at the Raul Yzaguirre School for Success on the east side of Houston and the Southwest Charter School’s High School.

As a result of Project GRAD’s success in supporting and motivating underserved students to stay in school and prepare for their next step in life, AT&T has committed a total of $2 million to the program in the last 3 years. The Project GRAD Houston GRADuation Aspirations program currently serves approximately 1,735 predominantly Latino students ranging from grades 9-12 in the city.

“The effects of dropping out of school have serious consequences for society at large,” said Dr. Ann Stiles, President and CEO of Project GRAD Houston. “Project GRAD Houston’s programs have a proven track record with more than 7,000 GRAD Scholars going to college and succeeding at a rate that is triple the success of their peers. We believe additional programs in new schools will increase opportunity for students – for high school graduation and readiness for success in college and careers.”

“AT&T is proud to support the expansion of Project GRAD across the Houston area,” said Kerrick Henny, vice president, AT&T External Affairs. “We have made it our goal to invest resources and develop initiatives focused on education to help prepare students for a bright future.”

“Project GRAD makes sure every student feels more than capable of becoming who they want to be,” Ruiz says. “I know for a fact I would not be where I am right now if it was not for the support of this program.”

Project GRAD was selected as one of 18 recipients nationwide that will share in $10 million from AT&T through the Aspire Connect to Success. AT&T Aspire is the company’s signature philanthropic initiative that drives innovation in education— through technology, social innovation and relationships— to ensure all students have the skills they need to succeed in school and beyond. AT&T Aspire has impacted more than 1 million students since its launch in 2008.

END_OF_DOCUMENT_TOKEN_TO_BE_REPLACED

ALDINE – Neighborhood Centers Inc. hosted the wrap-up session of their “Visioning” project last Thursday night. About 50 people attended the event held at the offices of the East Aldine District.

Most of the people attending had earlier in the year participated in workshops, expressing the goals and visions for the future of the Aldine community.

Bo Fraga of NCI was the moderator, and explained how the group had organized around four visions statements, in an effort to guide and accomplish change in the Aldine community. The workshops had summarized the vision statements in four categories:

One, Aldine residents have Pride in the Community, shown by Celebrations and a future Museum. An example was the high ratings for MacArthur High School, nationally the Best HS in 2013; Maria Avila presented this vision.

Two, Aldine is a place to Nurture Families, and Empower all People. An example was Voter Registration, and a voting machine in the room; Avian Molina, Naomi Worsham, and Coco Martinez presented their vision.

Three, Aldine is a good place for Healthy Living & Wellness. The group passed out apples and green bean seeds as encouragement. They cited Keith Wiess Park as a good recreation resource. They suggested the need for a new hospital in the area; Bruce Young and Gray Lewis presented the vision.

Four, Aldine is a good place to establish a bond between Businesses and the Community. The group suggested starting a new Chamber of Commerce for small businesses. Felipe Avila and Raudel Macias presented the vision.

The quilt had 50 squares that were drawn or sewn by members of the community, each expressing a hope or vision in one of the four categories.

The quilt was put together with the help of many sewers, under the direction of Alma deAlejandro, and Alexis Ramirez.

Each of the individual groups plans to meet again, to keep momentum going on their goals. If you want to partipate, or need more information, contact Jose Rivera at 832-819-7118 or Richard Cantu at 713-595-1232.

END_OF_DOCUMENT_TOKEN_TO_BE_REPLACED

To start the program, Joyce Wiley introduced and recognized several of the teachers of BAA. Wiley is a board member of both the BAA and the East Aldine District, which has supported the BAA organization since its inception.

East Aldine District believes that BAA is helpful and complementary with their own goals, of improving living conditions in the District by promoting social and educational skills to an underserved population.

The program was chaired by Tom Burdette, who with Mariana Sanchez has been responsible for the success of the Bonding Against Adversity program.

Patti Acosta, a board member of the East Aldine District, presented the Student Scholarship awards to Kimberly Alvarez and Miriam Cruz.