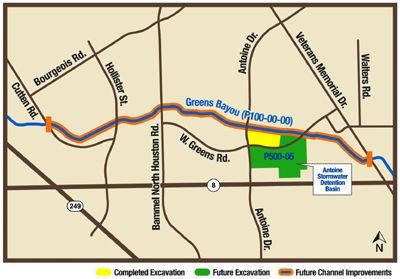 This federal-local partnership project includes completion of a stormwater detention basin on 138 acres and approximately 3.7 miles of channel conveyance improvements from Cutten Road to Veterans Memorial Drive. West Greens Drive bisects the basin, dividing it into two parts, but it will be connected by means of box culverts and will function as a single flood damage reduction facility.

When fully complete, the basin will hold approximately 1,650 acre-feet, or 538 million gallons, of stormwater that would otherwise threaten homes and businesses. Stormwater detention basins reduce flooding risks and damages during heavy rain events by safely storing excess floodwater and slowly releasing it back to the bayou when the threat of flooding has passed.

The Corps recently awarded a $21.4 million contract to Lecon Inc. for the following work:

• Excavation of the south cell of the Antoine basin, which is located south of West Greens Road;

• Construction of the channel conveyance improvements from Cutten Road to Veterans Memorial Drive.

“This project represents strong partnership between HCFCD, Stakeholders and Corps of Engineers. Upon completion, it complements Flood Risk Reduction (FRM) improvements in place and planned by HCFCD along Greens Bayou; thus magnifying FRM value along the Bayou. Upon completion, the project lays a foundation for other potential value added and permitted improvements by either Stakeholders or HCFCD; such permitted improvements will add to the community quality of life,” said Shakhar Misir, USACE Galveston District project manager for the Greens Bayou project.

After construction is complete, the Corps will plant native trees and grasses in and around the basin, with wetland plants placed in low areas as part of the landscaping. They will also plant grasses on disturbed areas along sides of the bayou, and native trees where appropriate along the bayou banks. These features will improve stormwater quality, support wildlife and provide opportunities for recreational benefits.

Completion of this phase of the federal project will take an estimated three additional years.