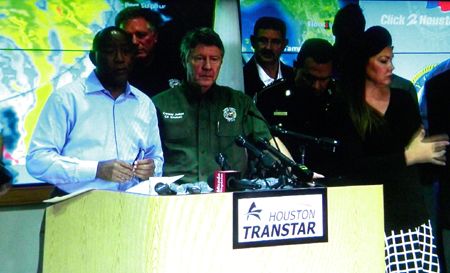 Harris County and much of Southeast Texas is trying to recover from the most horrendous hurricane and subsequent flooding in the state’s history.

Hurricane Harvey approached the Texas coast slowly the last week of August, and then on Saturday September 2nd torrential rains started and continued for two days.

After that, the fun-off and release of damed water brought severe flooding to a number of Houston and Harris County neighborhoods.

The total numbers are staggering, if not complete. The deaths from the floods are now above 40, and the total number of houses affected by flood water will exceed 100,000. Mayor Sylvester Turner said that about 5% of the houses and Houston have been damaged by high water. Another major casualty is vehicles that were stranded in the water as it rose quickly, and this number is estimated to be above 80,000.

Total rainfall for the last week is above 50 inches in most areas of Harris County and southeast Texas.

First responders, such as the Houston police and fire departments, and Harris County Sheriff’s office, have made over 1000 deep water rescues, and a total of over 6000 responses to all types of calls.

It is reported that as resources came into the city from other parts of Texas and the nation, the number of Coast Guard helicopters involved in rescues was 22, airplanes 3, and boats 28. In addition, Governor Abbott declared a state of emergency in 11 counties, and later added more.

The hurricane first made landfall at the city of Rockport, some 150 miles west of Houston. It then proceeded on to Victoria, and then returned south, heading up the coast to Houston, and eventually Baytown, Beaumont, and Arkansas. Reports from Rockport were of heavy structure damage, with tornadoes accompanying the hurricane along its path.

The governor also sent Task Force 1 and 2, specialized military units trained in storm rescues. One of these went to San Antonio, and the other was housed at NRG stadium in Houston, with a number of high water vehicles and boats.

As the rain and flooding continued over the weekend, the city closed both airports. Over 200 highway intersections were reported with impassible water over the road, and this continued for several days. I-10 was closed for almost a week in several locations, including the bridge over the San Jacinto River. The rainfall was intense in some places, such as Hobby airport which reported 10 inches of rain in only 1-1/2 hours.

Weather experts were comparing Harvey with hurricanes and storms in the past,specifically Allison 2001, Katrina/Rita 2005, Ike 2008, and the tax day/Memorial day floods in 2015. It was clear to them that this storm would exceed all of the others in size, duration, impact on structures and neighborhoods, and dollar amounts of damage and rebuilding. The latest estimate for rebuilding the area has risen to $125 billion dollars.

The federal emergency aid agency, FEMA, has pledged much of this money, although President Trump called for a reduced budget for this agency. It will probably take action from Congress to make the enough money available.

President Trump was in Texas last Tuesday, in Rockport, and last Saturday in Houston and Beaumont. Governor Abbott and Vice President Pence have also made inspections of the damage.

Due to the high volume of water, the Army Corps of Engineers and the Harris County Flood Control District decided that two large dams, Addicks and Barker, could not hold back that much water without the risk of catastrophic failure, and ordered a release of water into the neighborhoods and Buffalo Bayou below the spillways. This resulted in flooding of several feet in about 10,000 homes in West Houston, according to officials. It also meant that water was in major buildings in the downtown Houston area, including Wortham Center, the Alley Theater, and their parking garage, and Channel 11 television studios.

In East Harris county, environmentalists were concerned with two potential catastrophies. A chemical plant that processes organic peroxide lost its power, and flooded, leaving nine container loads of this chemical overheating, and due to explode. In fact three of them did catch fire, with minor explosions, and authorities destroyed that other six as the best method to deal with them. The other concern was strong currents and flood waters over the San Jacinto River Waste Pits, with its toxic waste “capped” to contain it. As of Monday, Sept. 4 the EPA planned to investigate the cap on-site for damage or possible releases.

By the end of the week, rescued families were in 4 major Red Cross shelters, totalling about 28,000.

Offers of aid and donations of goods and money have come from all over Texas and the nation. One fund, set up by Texans player J. J. Watt, has received a total of $16 million dollars, which has been used for water, food, and domestic supplies.