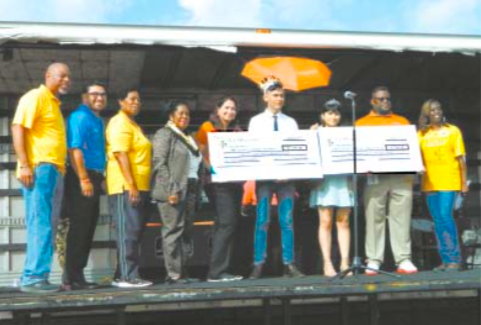 NORTHEAST – The annual Jensen Jubilee was held last Saturday, and it was more than a street fair.

Organizers David Smith of New Bethlehem Church, and Fred Russell of Greater Jerusalem Church are planning on rejuvenating a once thriving neighborhood, and breathing life into it with family friendly events such as this Jubilee. The overall theme is “Taking Jensen Back” and the organization is the Houston Northeast CDC.

To help them in this endeavor, they had many government leaders, civic organizations, and businesses participating in the Jubilee. This included Congresspersons Gene Green and Sheila Jackson Lee, State Representative Armando Walle, State Senator Sylvia Garcia, City Councilwoman Karla Cisneros, Sheriff Ed Gonzales, and others.

The event sponsor was UT Physicians, providing scholarships of $1500 each for two students crowned King and Queen.

The Jubilee started with a parade down Jensen from Trout Street, ending at the parking log next to Greater Jerusalem church. There about 20 booths were set up, plus a stage with sound equipment courtesy of Robinson Entertainment.

Pct. 1 County Commissioner provided free hot dogs, and a kid zone had a bounce house, games, and a train ride.

A photo booth to commemorate the day was set up in the church.

The mistress of ceremonies was Yuroba Harris from Gene Green’s office. Also present were Rebecca Reyna of the Greater Northside Management Distric and Myriam Saldivar of Armando Walle’s office.

Yuroba Harris announced that the King and Queen of the Jubilee had been chosen, and would receive $1500 scholarships, courtesy of UT Physicians. They are King Jose Perez, and Queen Madelaine Rojas.